Coronavirus: What The Internet Has To Say The coronavirus pandemic has, understandably, become a fixture in pretty much everyone’s daily lives around the world. Since its outbreak in Wuhan in China, news reports and public reactions to the virus have steadily, and then quite rapidly increased. From the moment the World Health Organisation (WHO) declared the spread of COVID-19 a worldwide pandemic on March 11th, this international crisis gained even more coverage.

But what does this coverage mean in the modern world and the age of social media? Aside from being Donald Trump’s favourite phrase, “fake news” is a very real problem in this day and age. The spread of the virus has caused enough alarm as it is, but false reports and advice over what to do – especially given that it is the health of people at stake – could be disastrous. Rewind to March 9th, however, and you’ll find that the President was playing down the danger of the virus, blaming “the Fake News Media” for over-exaggerating the threat of COVID-19.

By March 18th, the President had changed his tack on coronavirus, claiming to have always treated the virus “very seriously” and pointing to some of the measures the United States have taken against COVID-19 as evidence. And while you may be asking why the opinion of one man is so relevant in how the internet has responded to coronavirus – albeit the most powerful man in the world – Donald Trump’s reaction has reflected that of the internet and wider society as a whole: ever-changing.

The very first reports of an unusual virus spreading around Wuhan in China came on December 31st last year, when China informed WHO of what it thought were unusual cases of pneumonia. In the UK, initial internet trends indicate that for a long period of time, internet users were not submitting many searches about coronavirus. Right up until March 1st, Google Trends indicates that search interest in coronavirus was relatively low (as shown on the graph below) despite the disease’s spread across the globe. As you might expect, as COVID-19 has impacted more and more on life in the United Kingdom, internet activity relating to the virus has increased significantly. From the graph above, we can see that the first initial jump in interest came around January 29th, when the first two people in the UK tested positive for the virus. However, gradually decreasing search numbers throughout early February show that at this point, interest and worry about COVID-19 were quite low.

That is, until, reported cases of the virus in the UK began to increase at a greater rate. The biggest increase in searches, when coronavirus essentially becomes one of the number one issues of interest for internet users, comes around the 28th February. Perhaps not so coincidentally, it was on this date that the first British citizen died at the hands of COVID-19.

One of the most interesting trends we have seen in the internet response to coronavirus is the jump in a number of search terms that usually carry little to no interest in Google users. On the graph below, we can see the spike in searches for three things that have all been impacted by the coronavirus pandemic: hand sanitiser, toilet roll, and pubs.

As the graph shows, there has been a noticeable increase in interest in all three of these things. Interestingly, hand sanitiser experiences a particular spike in searches around March 3rd – the same date the NHS released comprehensive guidance on how to wash your hands. Hand sanitiser also proved the most popular search of the three right up until March 20th – the date that Boris Johnson announced all pubs and restaurants must close, providing another huge blow to everyday life in Britain. On this date, search interest in the term “pubs” experienced a huge spike.

Both in the UK and around the globe, fake news is now a very real thing. Particularly prevalent on social media, the ease with which we can now spread information (or misinformation in this case) has led to numerous false rumours regarding coronavirus.

Various pieces of misinformation have rapidly flown around the net. In France, a falsified screenshot of a scientist’s twitter led people to believe there is an ingredient in the recreational drug cocaine that can fight off COVID-19, and led to the term “cocaine kills coronavirus” trending on French Twitter. The French authorities even had to release a statement informing people that this information was indeed untrue.

There have been numerous examples of other rumours, the most prominent usually involving a fake story stating that a vaccine against coronavirus can be bought. This has been particularly problematic in Italy.

The fight against fake news

Fake news is a problem more than ever in the time of a global pandemic. People’s lives are at stake, and the spread of misinformation could be more costly now than at any time ever before in the internet age. And this is something reflected in the searches of UK internet users – interest in fake news as a search term has increased drastically in the period of this coronavirus outbreak, as shown in the graph below. People are evidently concerned about the specific effect fake news might have in this tumultuous time. As such, governments the world over has introduced measures to try and combat fake news. On March 10th, the NHS announced plans to tackle coronavirus fake news and make sure people were well informed regarding how best to avoid the virus. Two days later, the UK government published its goals to tackle fake coronavirus news not just in Britain, but around the globe.

And in fairness, it’s not just governments doing their bit. Major websites have all attempted to minimise the effects of fake news. Google has taken numerous precautions, including pushing news articles from trusted sources such as WHO, the BBC and the NHS to the top of search result pages. This also includes a direct link to the NHS’s coronavirus guidance page on their website at the top of Google search results. The social media networks have taken measures too. Facebook, LinkedIn, Twitter and TikTok have all pinned links to coronavirus guidance and advice at the tops of their respective search results. 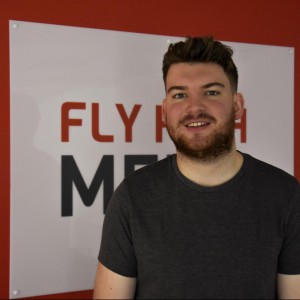 Matt is the Founder and Managing Director of Fly High Media. He is also a public speaker and digital marketing trainer. Matt has been featured on publications such as Social Media Examiner and Prolific North. He also enjoys creating weekly video content for Fly High Media's YouTube channel.